History: Missions in Alta California were established as a result of the threat of Russian fur trappers encroaching on the area. Spain learned land could be claimed inexpensively by establishing a mission, sending dedicated padres and supplies, and adding some soldiers for protection.

Mission San Luis Rey, 18th in this chain of missions throughout California, was founded in 1789 by Padre Fermin Francisco do Lasuen, successor to Padre Junipero Serra. He named it after St. Louis IX, King of France during the 13th century.

Between 1798 and 1832 Mission San Luis Rey became home to 3,000 Indians who helped care for 50,000 head of livestock. The Mission’s land was cultivated for grapes, oranges, olives, wheat, and corn. Self-sustaining, the Mission channeled water from the river to the north to irrigate its crops. Buildings were constructed using local materials of adobe, fired clay bricks, and wooden timbers. By 1830 the Mission was the largest building in California.

During the 1950s and 1960s the Friars uncovered the Soldiers’ Barracks and the Lavanderia. Today, restoration is ongoing.

Quadrangle: If you want to tour an important part of the Mission, sign up for a special tour to access the quadrangle. This area houses workshops, living quarters, a kitchen, an infirmary, a winery, and storage.

Pepper Tree: Also within this quadrangle is the oldest living Pepper Tree in California. The first pepper trees in Alta California were planted by Father Antonio Peyri, using seeds brought here in 1830 by a sailor from Peru. Even if you don’t take the special tour, you can still see this tree and the surrounding gardens through the original carriage arch.

Cemetery: The cemetery has been in continuous use since the Mission was founded. It is the oldest burial grounds in North San Diego County still in operation. With recent expansion it is possible for area residents of all faiths to be buried here. Check out the skull and crossbones above the entrance to the cemetery. This is typical of Franciscan cemeteries.

If you’re a television show watcher from the 1950s, you may recognize those gates. Walt Disney used them for the filming of several television episodes of ‘Zorro’ at San Luis Rey. 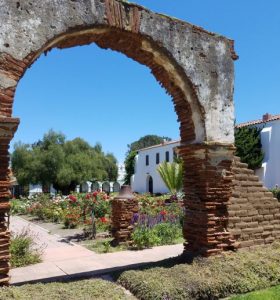 Architecture: While missions in California are recognizable by their architecture, sparkling white exteriors, and bell towers, Mission San Luis Rey is among the finest existing examples of Spanish-Colonial architecture in all of California.  It’s one of only two cruciform, or cross-shaped, churches ever built by the Spanish in the region. It is no wonder it’s a National Historic Landmark. The main walls of the church are 30 feet high and 5 feet thick with an adobe interior and baked brick exterior. Lime-based whitewash coats the walls. Its bell tower is an impressive 75 feet tall. Another unique feature here is the restored wooden dome. This is the only mission with a dome and cupola.